No. 1 Rose Zhang chose college golf, something no junior player of her caliber has done in decades

Home » No. 1 Rose Zhang chose college golf, something no junior player of her caliber has done in decades 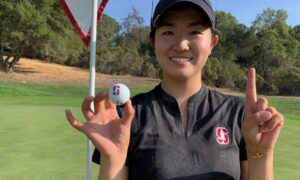 By: Beth Ann Nichols – September 27, 2021
Rose Zhang begins her competitive career at Stanford on Monday at The Molly Collegiate Invitational in Seaside, California.

Zhang enters college golf with a game so complete, that no one would’ve been a bit surprised to see her win an LPGA event as a teenager, much like Lexi Thompson, Brooke Henderson, Paula Creamer, Lydia Ko or Morgan Pressel. There’s still time for that, of course, as she’s only 18.

While all of those players went straight from high school to the professional ranks, Zhang is the best junior girl to head to college in decades – possibly ever.

In July, Zhang became the eighth player to capture the U.S. Girls’ Junior and U.S. Women’s Amateur, but the first to win the Women’s Am title first. A two-time AJGA Player of the Year (2020, 2019), Zhang has commanded the No. 1 ranking for more than a year and twice earned the McCormack Medal as the world’s leading amateur.

Zhang could topple that record, if Rachel Heck doesn’t beat her to it first. Heck won six times last spring in one semester of golf.

So far, Zhang is off to a memorable start in Palo Alto, winning the team’s first multi-round qualifier by 10 strokes. The effort was highlighted by her first hole-in-one on the par-3 17th at Stanford Golf Course with a 5-iron from 170 yards. Teammates Heck, last year’s NCAA individual champion, and Aline Krauter were witnesses and documented the moment.

Even with Zhang on campus, the Cardinal won’t start the season in full strength. Heck isn’t in the lineup at The Molly because she’s under the weather, and Angelina Ye is still back in China wrapping up the Chinese National Games.

Zhang told reporters at the Augusta National Women’s Amateur last spring that college would help her to mature. Back then, it wasn’t clear if Zhang would actually make it to college. She kept saying she was going ­– but would she really?

“She feels she has a lot more to learn,” explained Zhang’s longtime instructor George Pinnell.

The last time a marquee player like Zhang showed up to college was the late 90’s when Grace Park and Beth Bauer, who won 18 (Park) and 17 (Bauer) AJGA titles and were both two-time AJGA Players of the Year, went to Arizona State and Duke, respectively. Park holds the all-time record of career AJGA victories along with Leigh Anne Hardin and Kellee Booth.

“Rose Zhang would make the LPGA tour today, and she will make it in one, two, three or four years from now,” said Arkansas head coach Shauna Taylor.

“I don’t ever see the rush, as college is a great opportunity to gain something someone can never take away from you: a degree.”

Last week, Taylor’s Arkansas team got their annual up-close look at tour life at the Walmart NW Arkansas Championship. Three current Razorbacks and four former players were in the field in Rogers. For those coming back, the Arkansas stop feels like home on a global tour that’s downright exhausting.

Zhang, who hails from California, came to Stanford with friends already on the team, and this week begins the quest toward helping the Cardinal claim a second national team title. She recently led Team USA to a strong comeback at the Curtis Cup in Wales, going 4-0-1.

One of the most remarkable moments of the 2021 Ryder Cup was Rory McIlroy’s emotional television interview after his Sunday singles victory. McIlroy, a four-time major winner, called his six Ryder Cup appearances the greatest experiences of his career.

“I have never really cried or got emotional over what I’ve done as an individual,” said McIlroy. “I couldn’t give a s—. But this team, and what it feels like to be a part of, to see Sergio (Garcia) break records, to see Jon Rahm come into his own this week, to see one of my best friends, Shane Lowry, make his Ryder Cup debut. … I just can’t wait to get another shot at this.”

The ever-classy McIlroy was quick to apologize to NBC viewers for swearing. The moment got to him.

There’s something special about being a part of something that’s bigger than yourself. Rose Zhang wants a piece of that, and everything else that college life entails. 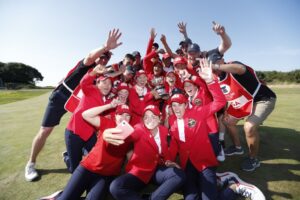 Michelle Wie West puts getting a degree from Stanford on the same level as winning the U.S. Women’s Open. Both were childhood dreams that she was determined to make happen. Wie West attended Stanford while playing on tour, of course, and called it the best decision she’s ever made.

“The normalcy of just going and living in a dorm and living on campus all four years,” she said, “having friends who didn’t play golf. I think that did so much for my personal growth.”

Zhang believes that will be the case for her, too. Her presence at Stanford sends a message to future world-beaters, and their parents, that extreme success in junior golf doesn’t have to result in a beeline to the tour, which can be a lonely and pressure-packed cauldron.

These are the days that money can’t buy.