Rose Zhang Presented With McCormack Medal At The Spirit

Home » Rose Zhang Presented With McCormack Medal At The Spirit

by Pete Wlodkowski of AmateurGolf.com 02 Nov 2021 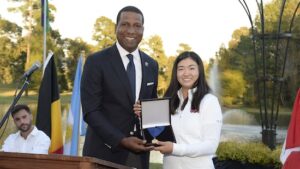 If you follow the amateur game (and our site) you are most likely familiar with the McCormack medal. But did you ever wonder how the winning player is presented with the medal each year?

I imagined that the USGA found a place to award the medal in person. But what I didn’t realize is that they would send a member of their Executive Committee to do the honors.

That committeeman, Fred Perpall, made the trip from Dallas to Whispering Pines where he found the perfect stage and audience to honor the second-time medal winner Rose Zhang. The occasion was the opening ceremonies of The Spirit International Amateur, where players from 20 countries are competing sent teams of 2 men and 2 women to compete across multiple team and individual categories.

Perpall is CEO of The Beck Group, a $1.4B Dallas company where he runs domestic and international design, planning, real estate consultancy, and construction businesses. He joined the USGA Executive Committee in 2018. The McCormack Medal is awarded annually by the R&A and USGA each fall, to the top-ranked male and female amateur player in that year’s WAGR rankings. And it’s more than just a gorgeous piece of hardware; the award comes with exemptions into major events like the U.S. Open.

Since receiving her first McCormack Medal October of 2020, Zhang has competed in three LPGA major championships, making the cut in the Amundi Evian Championship last month. She missed the cut in the 2020 and 2021 U.S. Women’s Opens after tying for 11th and earning low-amateur honors in the ANA Inspiration last September. She also tied for third in the 2021 Augusta National Women’s Amateur in August and earned a runner-up finish in the LPGA Symetra Tour’s Carlisle Arizona Women’s Golf Classic in March. She has spent 47 straight weeks as the No. 1 player in the WAGR Women’s Ranking.

“To receive any award with the USGA and The R&A’s names on it is incredible, so to have it happen a second time is both rewarding and humbling,” said Zhang. “The work I’ve put into my game over the past few years has truly been paying off, and I am so grateful to all who have supported me along the way. I look forward to continuing to reach new heights as I take my game to the collegiate level.”

The USGA and The R&A co-award the McCormack Medal annually. It is named after Mark H. McCormack, who founded sports marketing company IMG and was a great supporter of amateur golf. The World Amateur Golf Ranking, which is supported by Rolex, was established in 2007 when the men’s ranking was launched. The men’s ranking encompasses nearly 2,900 counting events, ranking 7,309 players from 117 countries. The women’s ranking was launched in 2011 and has a calendar of around 1,900 counting events with more than 3,830 ranked players from 88 countries.