‘She is a sage’: How Rose Zhang helps fellow Stanford player Michael Thorbjornsen, who will hit the first shot at the U.S. Open

Home » ‘She is a sage’: How Rose Zhang helps fellow Stanford player Michael Thorbjornsen, who will hit the first shot at the U.S. Open

BROOKLINE, Mass. – It hadn’t really hit amateur Michael Thorbjornsen that he was hitting the first tee shot at the 122nd U.S. Open until a reporter asked what it meant. Suddenly, that 6:45 a.m. ET tee shot on Thursday at The Country Club took on new meaning for a 20-year-old who grew up not far in Wellesley.

“That’s very special,” said Thorbjornsen. “Something I’ll remember for the rest of my life. I guess I’m a part of history in that sense.”

Thorbjornsen, the 2018 U.S. Junior champion, had his U.S. Open debut as a teenager three years ago at Pebble Beach, where he made the cut and finished 79th. The rising Stanford junior qualified for this year’s championship via an 8-for-3 playoff in sectional qualifying.

It’s not often that an elite male amateur points to the best player in women’s college golf as role model, but Thorbjornsen isn’t shy about going to fellow Stanford player Rose Zhang for advice.

“Everything on that episode is true about Rose,” said Thorbjornsen of No Laying Up’s recent film on the Cardinal women’s team.

“She is a sage. She’s the youngest one there, but she’s definitely the wisest when it comes to golf. She knows exactly what she’s doing.”

Thorbjornsen said Zhang, 19, is always the first one at the school’s practice facility and often the last one to leave.

“My dad is my swing coach and he is obsessed with her swing,” he said. “So I’m always asking for pointers or asking like how things look because I’m almost trying to emulate her swing in a way.” 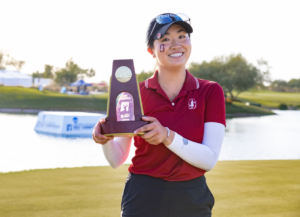 Stanford’s Zhang is the No. 1 player in the world and her resume includes victories at the U.S. Women’s Amateur and U.S. Girls’ Junior. She recently won the individual title at the NCAA Championship and led the Cardinal to the team title.

Thorbjornsen looks to Zhang in particular for tips on how to practice.

“I know this might sound kind of stupid,” he said, “but she just says to putt more, hitting like 100 4- or 5-footers in a row. I kind of struggle with some three-putts here and there.

Zhang helped lead Team USA to a convincing victory at the Curtis Cup last week at Merion. She and Thorbjornsen will team up together to represent the U.S. in July at the Arnold Palmer Cup in Switzerland at Golf Club de Genève.