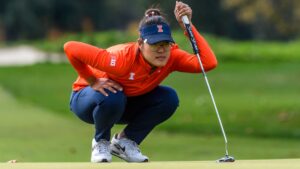 COLUMBUS, Ga. – Graduate student Crystal Wang has been named one of the 20 players on the Final Fall ANNIKA Award Watch List, the Haskins Foundation announced on Monday. The ANNIKA Award presented by Stifel is given annually to the top player in collegiate women’s golf.

Through the first four tournaments of the 2022-23 season, Wang has recorded a scoring average of 69.33 over 12 rounds and has placed in the Top 15 in all four events. She has also placed Top 5 in three-straight, including a career-best second-place finish at the Illini Women’s Invitational at Medinah on Oct. 10-11.

The Diamond Bar, Calif., native’s 54-hole total of 14-under at the Illini Women’s Invitational at Medinah set a new program record and her opening round six-under 64 at the Schooner Fall Classic matched the second-lowest single-round score in program history. Her performance at Medinah also helped the Illini set the second-lowest (10-under) and third-lowest (nine-under) team rounds in program history as well.

Following a tied-for-fifth finish at The Ally on Oct. 17-18, Wang was named Big Ten Women’s Golfer of the Week for the first time this season and for the third time in her career.

She is currently ranked as the No. 16 in the country by Golfstat and is also No. 31 according to Golfweek.

Wang and the Fighting Illini are back in action on Oct. 31 at The Biltmore Golf Course in Coral Gables, Fla., for the Hurricane Invitational, hosted by the University of Miami.

ABOUT THE ANNIKA AWARD PRESENTED BY STIFEL
Created in 2014, the ANNIKA Award presented by Stifel is annually given to the top female Division 1 collegiate golfer; the winner voted on by players, coaches and members of the college golf media. Named for Annika Sorenstam, the award was created in partnership with the Haskins Foundation to acknowledge the top female golfer and to match the Haskins Award presented by Stifel, which acknowledges the top male Division I collegiate golfer. Rose Zhang (Stanford) became the 8th ANNIKA Award winner in 2022, and the second consecutive winner from Stanford.